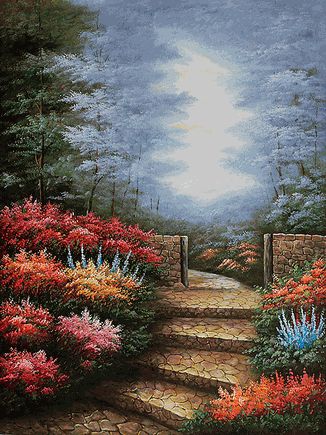 Sage Yajjavalkya speaks “Oh! Bharadhwaja, Maharishi Narada was not at all happy with the advice of Lord Mahadeva, he could not keep quiet without sharing his success story with all the deities. The Maya of Mayapathi is so powerful that no Jeeva is free from it, there were several interesting things that took place after this incident. Oh! Mune, no Jeeva is free from the influence of Time and impulsions of Maya of Mayapathi, and no one could change it. Maharishi Narada visited the Bhrama Loka and shared information with his father, Lord Bhrama discouraged Narada to share it with Lord Vishnu. Immediately, Narada left to Vishnu Loka, holding Karathala/chime and Veena singing in praise of Lord Hari. Maharishi Narada arrived in the milky ocean, where the supreme Lord Narayana who is the essence of Veda and Vedanta, resides with his beloved consort Goddess Sri Mahalakshmi. Maharishi Narada was reverentially greeted by Goddess Sri Mahalakshmi, and offered a seat to Rishi, the supreme Lord Narayana who symbolizes living and non-living things began to speak pleasantly “Oh! Maharishi, kindly accept my humble Pranams to you, haven’t seen you for a long time.” Maharishi Narada began to explain the Tapasya he had undertaken in the foothills of Himalayas, and his success over Kamadeva as well. Mayapathi smiled at heart, listening to Maharishi Narada, and the Lord Raghupathi who is the Lord of Maya looked at the Sage passively.”

Posted by Vishwanathan Uma at 11:05 PM