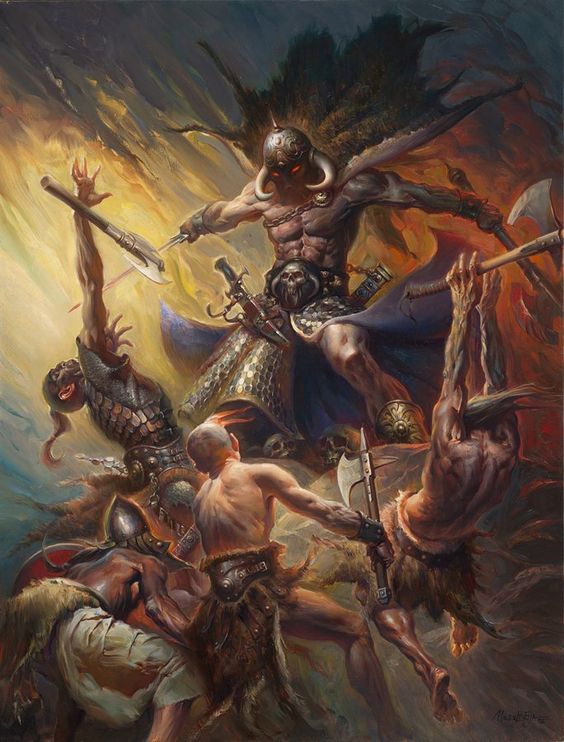 Sage Yajjavalkya speaks “Oh! Mune, the ten-faced mighty Ravana conquered the three worlds, left no creature independent, ruled the world as he was desired. In the meantime, Ravana married to several gorgeous women from the clan of Kinnaras, Gandharvas, Yakshas, humans, deities, and celestials.  Indhrajeeth who was the elder son of Ravana has possessed the equivalent might of his father was ever-willing to follow the command of Ravana. The demons were the embodiment of sins, willfully moved through the darkest hours of night, committed all immoral deeds, tormented all the Jeeva confronted with them, using illusionary powers. Eventually, they have put a complete end to the religious and spiritual rites, the Dharmic rites were nowhere to be seen, they ruthlessly hunted down the twice-born, and caused damage to the Vedic way of living, slowly all the cities, and villages where the twice-born occupied were seized, and forbidden all the Vedic rites. The Dharma and virtues disappeared from the Earth completely, beliefs in scriptures and deities were thrashed, reverence to deities, preceptors, and twice-born have vanished once for all. There was no respect to Hari, Guru, Granth, or Santh Mahathma, twice-born, no religious or spiritual rites, fire sacrifices, austerities or vows, or Athmavichara held, people have completely lost interest in reading and listening to sacred texts which heaved the lives into extreme agony, anguish and grief.”

Posted by Vishwanathan Uma at 10:22 PM